In 2003 we met ZiM - Die Zillertaler Musikanten - for the first time in Mayrhofen.
Four Zillertaler Musicians with a great performance, talented and a super team !
For us it was clear they would become one of the best bands from Tirol - Zillertal - Austria.
They showed this the years after - with highlights at the Hirschbichalm and the open Air in Laimach 2007.
Unfortunately they decided to stop in 2008 - This was a great disaster for us and all their fans.
On this fanpage you find some sweet memories from them. I uploaded all my video's
and pictures - have fun and take a look ! Regards to guys from ZiM and all their fans.

2007 - July - Open Air in Laimach, fan day at the Hirschbichlalm, concert in Gasthof Brücke - all GREAT !!

Here are some video recordings I made this evening:

Here are some video recordings I made this evening:

These are the ZiM CD's I own 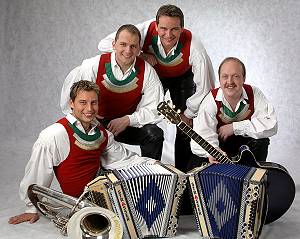